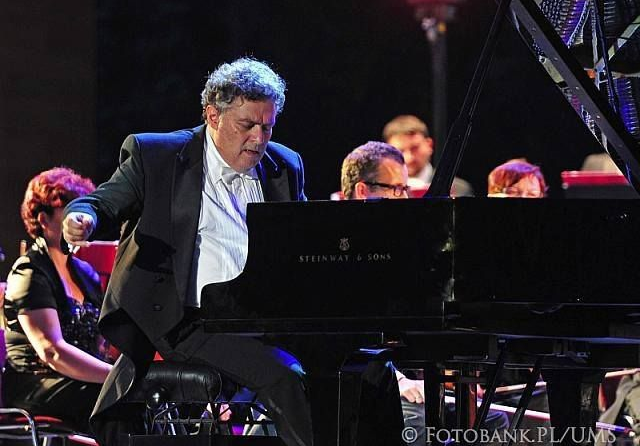 Alexander Peskanov, concert pianist, composer and master teacher, emigrated to the United States in 1973. A graduate of the Juilliard School, Peskanov made his orchestral debut under the baton of Mstislav Rostropovich, and has since traveled the world performing, and spreading the great traditions of the Russian Piano School. The author's series of six books, "The Russian Technical Regimen for the Piano" and video series "In Search of Sound" share all the secrets of Russian piano technique including weight-produced sound, flying finger technique, and a wide range of exercises, practiced by Rachmaninov, Prokofiev and other piano giants of the Russian School.

"This brilliant pianist can create incredible excitement and knows how to please a crowd," reported The Washington Post when reviewing Alexander Peskanov’s Kennedy Center performance of Rachmaninoff’s Third Concerto. He has since appeared as soloist with numerous orchestras including: National, Baltimore, St. Louis, Houston, Utah, Richmond Symphonies, and internationally with London Symphony Orchestra, English Chamber Orchestra, Polish Chamber Philharmonic and Hong Kong Philharmonic. In recent seasons, Alexander Peskanov, critically acclaimed as a “distinctive soloist” by New Yorker Magazine, has made concert appearances in Russia, Poland, including the Leonid Kogan and Elizabeth Gilels Festival at the Moscow Conservatory, and the Sopot International Music Festival, in a performance of Tchaikovsky’s First Piano Concert with the Polish Chamber Philharmonic. He also appeared at Carnegie Weill Recital Hall, Yale University and Bargemusic in New York, performing an all Chopin recital.

Alexander Peskanov is also a successful composer of classical works, including piano solos, piano concertos and chamber music. He has written twelve concertos for young pianists, two of them, Concerto No. 1 for Piano and Strings (Hal Leonard) and “Spring Concerto” for Piano and Orchestra (Alfred Music) have been selected by the National Federation of Music Clubs for 2016–2020. Recently, Peskanov’s concertos have also received International recognition and have been premiered in Europe, Asia and South America, including Germany, the Czech Republic, Mexico, Columbia, Thailand and Hong Kong.

Alexander Peskanov’s recordings include a CD of his own piano compositions entitled "Spirits of the Wind – Peskanov Plays Peskanov" which has been featured in a satellite broadcast on National Public Radio stations. Other recordings include music by Mozart, Beethoven, Brahms, Liszt and Scott Joplin. Peskanov has recorded for Naxos Record’s American Classics series and Musical Heritage Society. He is the recipient of three special ASCAP awards.